It’s been 4500 years since Comet NEOWISE C/2020 F3 last passed by the Earth on its travel around the Sun. A lot has changed since it last visited the inner solar system and our pale blue dot.

I was able to get some photos of it as it appeared in the early morning sky during early July and the evening sky later on in the month.

Comet NEOWISE C/2020 F3 is a long period comet and was first discovered on March 27th, 2020 by the NEOWISE space telescope. NEOWISE stands for Near Earth Object Wide-field Infrared Survey Explorer. At the time of its discovering it was magnitude 18 and some 250 million KM from Earth. By July it brightened to naked visibility and developed both a dust tail and an ion tail.

My first photo attempts were in early July around 4:30am. The Comet was rising in the NE sky before sunrise and the air was clear and clean. The Comet was fairly easy to spot with my naked eyes, but much easier to see and quite amazing in the binoculars.

I tried a few test exposures to see what worked best for me. I was using a William Optics Zenithstar 71 APO refractor at 334mm focal length and my trusty old Canon Rebel XT on a Skywatcher Star Adventurer Pro mini EQ mount. I settled on 4sec exposures at ISO 800. I took a few shots and combined them in Pixinsight. The result was very good although I did not capture the ion tail.

My next attempt at photographing Comet NEOWISE C/2020 F3 was in the evening sky on July 17th. Earlier that day I had scouted for a good location to shoot from, where there was a clear view of the NW sky. I found a good spot about a 10-15 minute drive from my home. It was a rural location, mostly crop fields, farms and distant forested area.

I was again using the William Optics Zenithstar 71, Canon DSLR and Star Adventurer mount. I located the Comet, much higher in the sky than I expected, but it was visible naked eye and the tail quite evident. By now the nucleus of the Comet was turning green as well.

I took a number of exposures over the course of an hour. I would end up with a good 10 minutes of frames to align and combine. Unfortunately I could not get Pixinsight comet align to work (or Deep Sky Stacker or ASTAP) to align and stack the images properly. The Comet was trailed in every attempt. So I could use the full 10 minutes and had to settle for just 2 minutes of of 10sec exposures to align and combine. This worked largely due to the fact the Comet did not move much within that short amount of time. Never-the-less, I was pleased with my photo of Comet NEOWISE C/2020 F3 and the ion tail was even slightly visible this time. 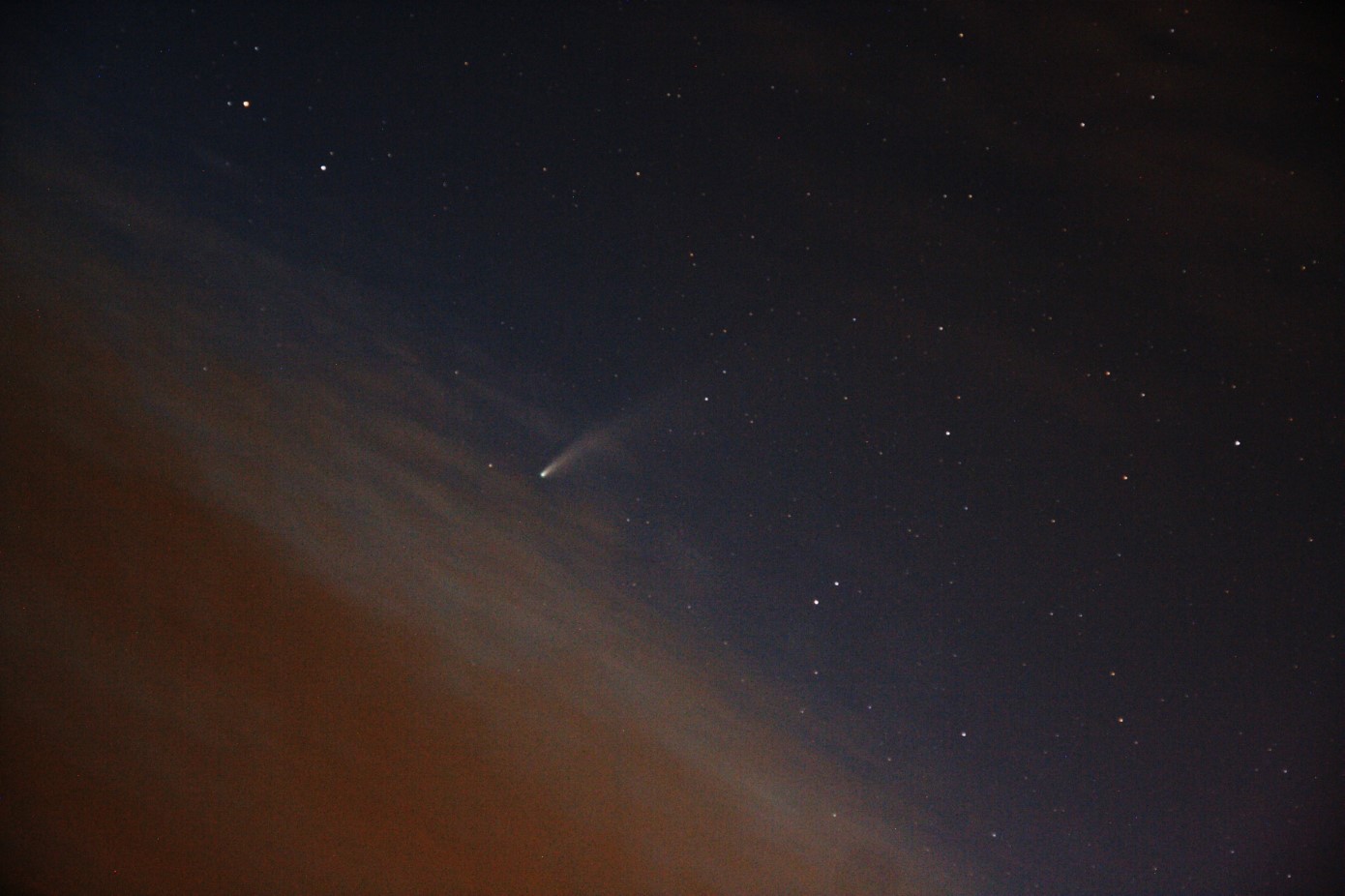 I’m going to attempt imaging the Comet more as it rises higher in the evening sky and fades away. I have on loan from KWtelescope.com a nifty Vixen FL55SS astrograph that I am going to try using. It’s 300mm focal length native and with the reducer, just 236mm. It will provide a nice field of view to capture the Comet in. I’ll be using it with my Canon DSLR and I also plan to piggy back the FL55SS on my Esprit 100, using the QHY168C camera to image with. I’ll post more about that in the days ahead.

For now I’ll leave you with this interesting fact about Comet NEOWISE C/2020 F3… this trip around the Sun has changed its orbital period. It won’t return for another 6800 years. Truly a once in lifetime opportunity. So get out there and catch a view of this Comet while you can!