While LED can reduce energy use and has been promoted by the lighting industry as better for the environment, there are many negative characteristics unknown to the general population about this new technology and its effects on our night environment. Read on to learn more about my effort to have better LED street lights for the Region of Waterloo, Kitchener and Waterloo and Cambridge. As well you can learn more about what makes LED bad and good.

From late 2015 through 2016 I fought vigorously to see the original target of 4000K LEDs reduced to no higher than 3000K. My efforts focused on Region of Waterloo transportation staff overseeing the LED criteria as well as Regional Councilors that would vote to allow the conversion to proceed. Targeting a lower Kelvin such as 3000K was more in line with dark sky preservation as outlined by the International Darksky Association (IDA). My goal was to hopefully see this once in a lifetime opportunity to have all street lights changed, to something that would reduce light pollution within Waterloo Region and the municipalities of Kitchener, Waterloo and Cambridge.

Among many emails, relaying of new science or medical on LED, examples of other cities and towns throughout North America that had bad LED experiences and submitted statements to council meetings, I fought the good fight to protect our night environment. One of my last statements on the topic can be read here: http://visibledark.ca/statement-on-led-conversion-region-of-waterloo-council-nov-1-2016/

Was my effort successful? Somewhat.

I suspect if someone like myself had not committed the time, resources and energy to pushing for better with the Waterloo Region LED street light conversion, we may have ended up with something much worse.

I had hoped for better I must admit. What was arrived at is a double edged sword. The “working group” comprised of transportation staff from Waterloo Region, Kitchener, Waterloo and Cambridge selected the Leotek GLC1 LED street light. The fixture, from my in-field observations of them, appear to control glare better than other LED fixtures, when at a distance from the light source. Looking down the road as example. Up close is a different story, where there is little shielding in the 60-80deg angle to prevent discomfort and/or disability glare to pedestrians or motorists. I had brought this point up to staff and councilors on many occasions. 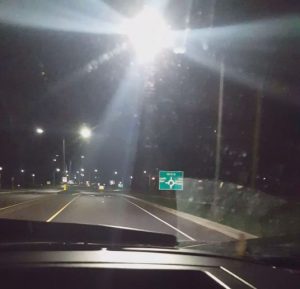 Many drivers complain that LED street lights are so bright they create a lot of glare, making it hard to see and unsafe.LEDs are measured 3x to 4x brighter than our previous HPS street lights. The effects of looking at them directly or via peripheral vision can be similar to what is experienced by the Sun shining in your eyes. They are much more intense, brighter (aka luminous) light sources. The 3000K (colour temperature) contains 2x-3x more blue light than the HPS amber lights we have used for decades past. We have no idea the full (negative?) impact of introducing a broad spectrum light will have on our night environment in the years and decades to come.

Update: A new study in the journal Science Advances is based on satellite data showing that the Earth’s night is getting brighter, and artificially lit outdoor surfaces (light pollution) grew at a pace of 2.2 percent per year due to LED https://phys.org/news/2017-11-energy-saving-boost-pollution-worldwide.html

Some of the problems with LED are that while 3000K is better than 4000K or 5000K, it is still adding significantly more blue light to our night environment. The whiter looking the LEDs the more blue light they contain. This was not clearly stated by transportation in presentations to Councilors. I pointed this out in a statement I submitted to Regional Council. The extreme increase in “brightness” of LEDs was also downplayed in my opinion. The combination of all of these results in what could potential have light pollution increasing, not decreasing, within Waterloo Region.

Blue light in recent years has been on the radar of Scientists, Doctors and Environmentalists as a catalyst for brightening the night time environment which can have many negative effects on people, wildlife, plant species and skyglow which diminishes your view of the stars above. It has even been noted that whiter, brighter LED lighting can disrupt nocturnal (night time) and diurnal (daytime) species foreging patterns, whereby the day time foragers go about their business at night. Essentially the LEDs can disrupt entire eco-systems which is really bad for us and other species. This again was downplayed by staff, in my opinion.

The photometrics (light distribution pattern) which, on paper, showed the new Waterloo Region LED street lights could reduce light trespass (which is light into your bedroom window or nuisance lighting, unwanted, disruptive lighting shining on to your property) but it wasn’t conclusive in my opinion looking at the data. The 60% reduction in light trespass stated by Waterloo Region transportation, IMO, is a bit lofty and unsubstantiated given what we know with LED and blue light contribution to light pollution.

Their figure also greatly depends on your proximity to the LED street light. In fact in some cases light trespass may increase. This can lead to, as other cases have shown, sleep disruption for your family which has damaging health impacts. I had stated many times over to staff and councilors the need for drop shielding to be included with the purchase of the new LED street lights, but this was dismissed as not needed.

Drop shielding adds an extra layer of light control that would reduce light trespass into families bedroom windows or from being a nuisance in cases where a property owner did not want the street light illuminating their property. Drop shielding can be engineered by the manufacturer or the municipality can do so depending on the circumstances. In either case, lighting of the road or sidewalks need not be impaired. It simply prevents excess glare and light trespass onto adjacent private property.

The Leotek LED street lights have two drop shield options available. The first drop shield for LED reduces backwards light falling onto properties or in windows where the home is on the same side of the street as the light, called the house side shield. The other, called a cul de sac drop shield, reduces glare on either side of the light as well as behind towards a house. If you have a nuisance problem with the new LEDs shining onto your property or in your windows at night, contact your municipality transportation department and ask that they order and install one of these drop shields or provide a custom solution that prevents their light from being a nuisance and health hazard to you and your family.

Interesting to note regarding light trespass, it has been shown that lights at night, shining onto your property or shining into your car parked in the driveway, can not only make it safer and easier for criminals to carry out their bad deeds but can also highlight valuables and make it easier for the thieves to steal from you. Essentially there is no conclusive evidence that lights on at night prevent crime. In fact studies carried out have shown more light increases crime! This certainly goes against what we’ve been taught from a young age to be scared of the dark and other false notions surrounding lighting at night we have.

Did you know in most cases crimes occur during the day? Night time occurrences are usually the result of valuables left on display, such as a dashcam or GPS device inside a car or change in the cup holder. Even a Christmas wreath hanging on a door was stolen in the Toronto area because it was lit up all night by porch lights and the thief was able to see it clearly but also the lights made it completely safe and easy to walk up the home’s sidewalk and take it. Be it street lights or porch lights they can’t call 911.

This brings me to another point I repeatedly brought to the attention of staff and councilors… dimming. Surprisingly to many, the overall energy savings by switching to LED is actually rather small. This is of course contrary to the lighting industry “hype” that wants to sell lots of LEDs to everyone.

Unlike other forms of lighting, LED can be controlled. This means they can be dimmed overnight through the use of additional hardware/software often referred to as “smart technology”. Dimming can achieve *real* savings for cities by as much as 50%. In addition, dimming street lighting over night when the majority of roads are quiet and not being used, also helps to reduce light pollution and skyglow. A win win for the environment. This point was lost on Waterloo Region transportation staff and most Councilors unfortunately.

Only the City of Kitchener was “smart” enough to realize the potential of smart technology and included it with their part of the Region wide purchase of LED street lights. City of Waterloo as example felt the technology was to costly and something better could come around the corner in the future. I think that could be said about any technology though and you’d be playing a perpetual waiting game for something better. The added costs to consult, spec and install new smart technology with what would be older LED street lights at some point, may even be more costly than if City of Waterloo had just committed in the first place.

It should be added that smart technology for LED street lights can do much more than dim. It can also wireless receive meter readings (such as from your water meter), relay snow fall levels on streets so plow crews know which ones are worse or which ones don’t need to be plowed and also let maintenance staff know of street lights that are not working and so much more. This all translates into additional money savings for the city and tax payers. 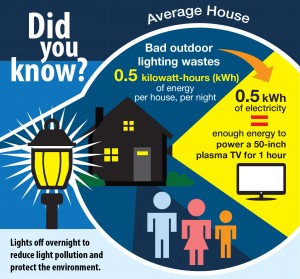 Cities, business owners and home owners switching to LED should understand that some forms of it can be harmful to our night environment and create pollution. If you’re buying new LED lights be sure:

Please feel free to contact me with any questions or concerns you may have regarding the Waterloo Region LED street light conversion or your home or business LED lighting plan. Shawn (at) visibledark.com