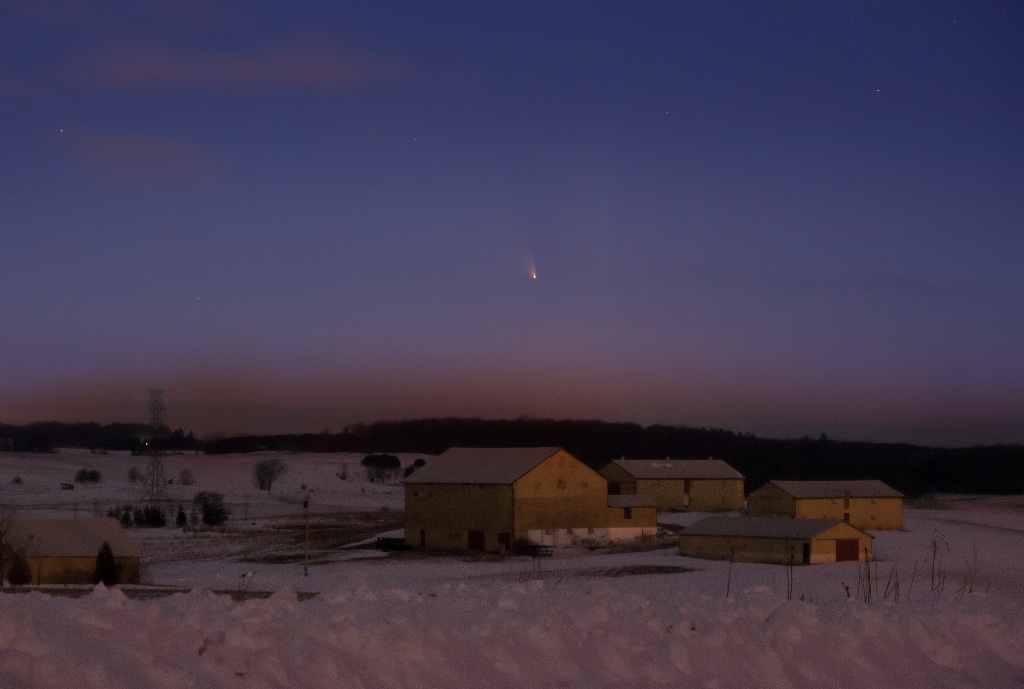 I had started to think this photo opportunity for Comet PanSTARRS wasn’t going to happen. The weather in my neck of the woods was not cooperating at all. The two best dates, March 12 and 13th, were a write off here thanks to clouds. The 15th was clear in the evening but some low hanging clouds lingering in the west had me believe I had missed it until I reviewed some random photos I took of the western horizon and realized the comet was indeed there. Faint but there. Doh! If I had stuck around another 30min till about 9pm it would have been easier to spot.

The comet isn’t easily seen with the naked eye mind you. Binoculars and/or photos reveal it best around an hour after sunset, so approximately 830pm EST (DST) and it’s still above the horizon by 9:15pm. It is growing fainter each day though as it now has past the Earth and is continuing on its journey.

Back to my story though! …So when I noticed on March 16th in the late afternoon, the sky clearing and bright Sun and beautiful blue above, I was giddy with excitement! This could be it if the clouds hold off. I looked at the Goes East NASA satellite imagery over Ontario and it didn’t look good. This clearing was small but if it could just hold on long enough there would be a chance for me to get a few photos of Comet PanSTARRS.

So I waited, and waited.

Three hours and counting. I double checked the camera, battery was charged, timer remote – check, and of course the tripod. Okay, everything is good to go. The western horizon was still looking clear mostly. There was a small band of clouds nearby but I was confident they wouldn’t interfere (fingers crossed confidence anyway!).

I knew from my last attempt that I’d need to wait till a good hour after sunset to really get the best shot at Comet PanSTARRS. Any earlier and it’s still just to bright in the western sky. It was about 8:10pm now, the sun had set around 7:30pm EST (DLT) here and my drive to the location I was going to attempt taking photos from wasn’t that far; a 10 min drive perhaps.

I had read in an unrelated article that this road separating the City of Waterloo and Wilmot Township had the highest road hill elevation in the Region and the horizon would definitely be clear over looking a rural area and not the other way (behind me) at over-development and light pollution from the cities.

With camera and gear loaded up in the truck, I set off with eager anticipation of finally photographing Comet PanSTARRS over Waterloo Region.

I arrived at my location around 8:25pm and another gentleman was there as well to catch a glimpse of PanSTARRS. It’s rather long orbital period, means we won’t see this visitor from the Oort Cloud for another 106,000 years. Truly a once in a lifetime opportunity!

Comet PanSTARRS was fairly hard to see with the naked-eye, at least for me. The other gentleman there, said he thought he could see it but wasn’t sure. So if that’s anything like me looking up and thinking I see something, he probably couldn’t!

He did however have some binoculars with him, and being a friendly chap, showed me roughly where Comet PanSTARRS was in the western sky from this vantage point, and let me use his binoculars to have a look. Sure enough it was there. Very evident in the binoculars. I was wowed! Even though this comet isn’t the most spectacular and fairly small looking in the sky, it was still amazing to see it with my eyes; and knowing how far it had traveled, not to be seen again by people of the Earth for more than a thousand centuries!

With my camera setup now, I took some 5 second exposures at ISO 800, F3.5, with my zoom lens set to 20mm. A nice wide shot to review and see exactly where Comet PanSTARRS was in the sky and how bright. There it was, almost dead center of the FOV in the photo. So I zoomed in more, set to 70mm (now at F4.5), and began taking more 5 sec exposures. As it got darker a bumped the exposure time up to 10 seconds each. Leaving sometime after 9pm I was quite happy with the images I had taken and was looking forward to getting home and downloading them to computer for further review.

Upon reviewing the photos in Adobe Bridge, I selected two of the best 10sec exposures and combined them. Being such short exposures there was a lot of background noise so I did some noise reduction and adjusted the curves slightly with a touch of saturation to help bring out some more colour. Voila! I had photographed Comet PanSTARRS!

I’m really excited about Comet ISON making it’s appearance in late Fall of 2013. So far the projections are that it’s supposed to be spectacular, appearing large in the sky, and may even outshine the moon!

The most famous of all the comets is Halley’s Comet. I had the opportunity to photograph it as a teenager with my Father, in 1986. It orbits the sun about once every 76 years, last visiting in 1986. Some “short period” comets have orbits that only take a few years. Given its aeon-long journey, Comet PanSTARRS is believed to have originated in the Oort Cloud, a theoretical junkyard of comets and other interstellar debris hovering about a light year away, on the very edge of the sun’s gravitational pull.

Comet PanSTARRS is now fading fast. Not visible with the naked eye, it is only visible through telescopes and in photos. It’s continuing on it’s 106,000 year journey around our Sun. Thanks for a great show Comet PanSTARRS!