Comet sails past the Helix Nebula

This image was published in Skynew Magazine (Canada), Nov/Dec 2016 issue.

A truly once in a lifetime opportunity. I was able to capture this image of Comet C/2013 X1 (PanSTARRS) passing near the Helix Nebula (NGC 7293) on its cosmic journey through space. While the comet appears from our perspective to be passing near the nebula they are in fact separated by great distance. The Helix Nebula is some 700 light years away from us. 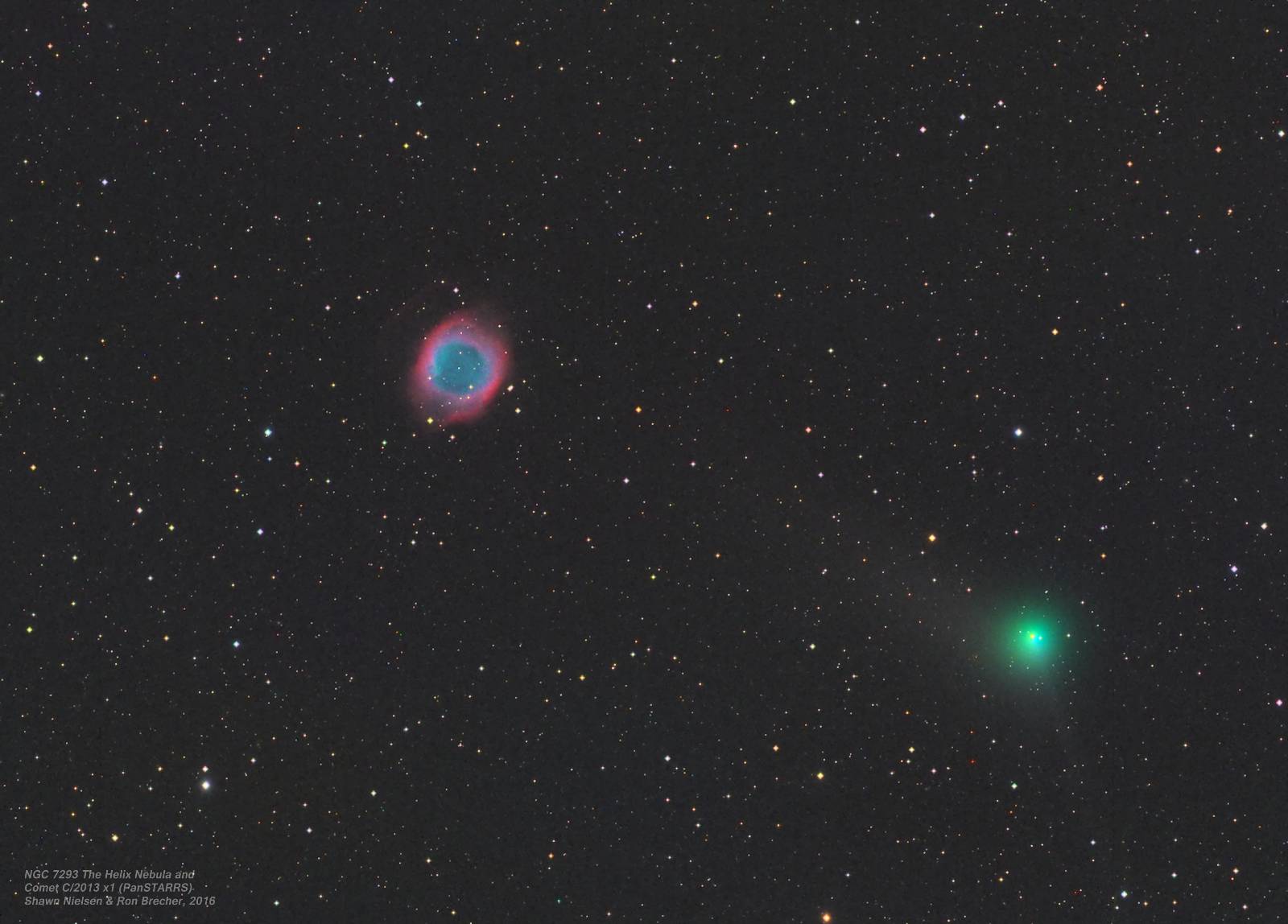 C/2013 X1 was discovered in 2013 by PanSTARRS (The Panoramic Survey Telescope and Rapid Response System). It consists of two 1.8 m Ritchey-Chretien telescopes located at Haleakala in Hawaii that watch the sky the night sky for moving objects on a continual basis.

The comet is expected to reach it’s peak brightness in June and July 2016. It could reach 6th magnitude and be visible in binoculars if it does continue to brighten. When I took this image the comet was around magnitude 8.29 and has a bright green coma surrounding it along with an unusual split blue ion tail that is faintly visible in my image. (more data would be needed to reveal this tail better)

This is a collaboration image with fellow astrophotographer and friend Ron Brecher. I collected the data and Ron processed it. I imaged the comet and Helix early morning June 5th, 2016, from the New Mexico iTelescope remote imaging platform T20. This event was very popular with many astro-imagers from around the world. The two nights Comet C/2013 X1 would be closest to the Helix Nebula (June 4 and June 5) the scheduling was booked solid for the widefield imaging telescopes.

I was up early around 5:30am EDT on June 5th, and did my usual check-in of the iTelescope launchpad which displays among other things all of the telescopes around the world and their availability as well as weather (all sky cams) and a large day/night map. As chance would have it the T20, Takahashi FSQ106 with SBIG STL-11000M, had just completed an imaging run for someone else and it showed as available. Morning twilight was coming fast though for New Mexico which is 2 hours behind my EDT time. The race to beat dawn was on!

I quickly created a script which tells the telescope where to point, how many and length of exposures to take, what filters to use and so forth. Given the slim timing I had, I went with an 8min total data of LRGB. While it’s not a lot of data to work with for astro-image processing it certainly yielded a pleasing result, IMO, given the circumstances.

Once the telescope had finished the imaging run, and the data files were uploaded to the iTelescope server, I was able to download them. I passed these files on to friend Ron Brecher who I thought would enjoy a quick and easy process of this astro data and a very unique event in the night sky.

It’s fantastic to have access to telescopes around the world like this. Where I’m located in Kitchener, ON, it was cloudy and raining the morning I took this data from New Mexico. If it wasn’t for these remote imaging setups, I’d have missed the opportunity to capture this moment in space and time. A wonderful image to add to my (and Ron’s) ongoing adventures imaging the visible dark.