M33 the Triangulum Galaxy is located about 14 degrees below the famous and great Andromeda galaxy M31. The easiest way to find M33 with binoculars is to start with M31 in the FOV then slowly follow the brighter stars down, past the double star Mirach by about 7 degrees and you’ll see a small faint glowing patch of light – you’ve found M33! 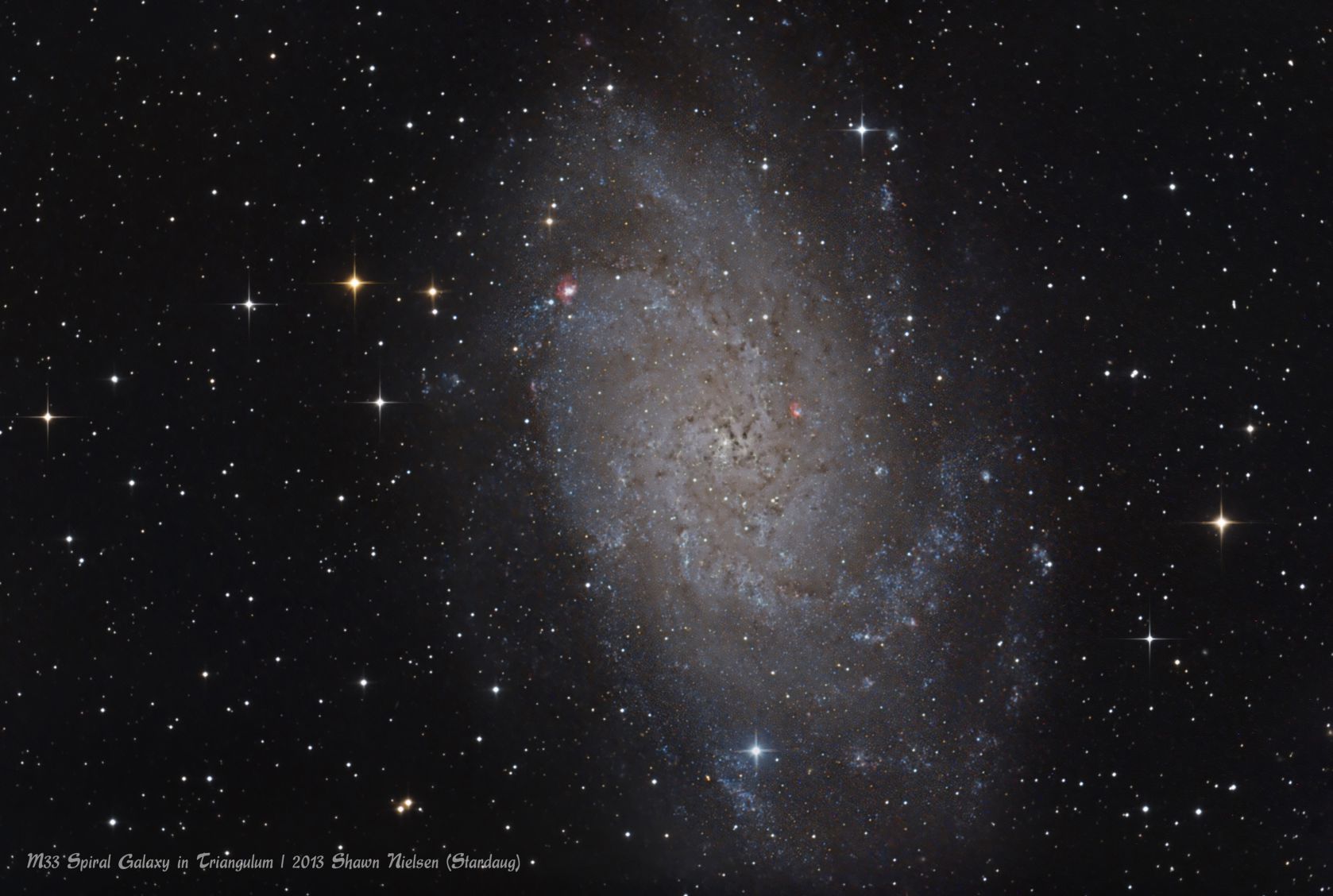 “The Triangulum Galaxy is a spiral galaxy approximately 3 million light years (ly) from Earth. It is catalogued as Messier 33 or NGC 598, and is sometimes informally referred to as the Pinwheel Galaxy, a nickname it shares with Messier 101. The Triangulum Galaxy is the third-largest member of the Local Group of galaxies, which includes the Milky Way, the Andromeda Galaxy and about 30 other smaller galaxies. It is one of the most distant permanent objects that can be viewed with the naked eye.”*

I took this photograph in the early morning hours of August 11th, between 1:30am and 4:30am EDT. It was a spectacular clear and dark night Aug 10th evening and stretching through into the morning of Aug 11th up in northern Ontario at the cottage. The sky up there is much darker than my usual imaging site which is closer to large urban cities. These cities cast their light pollution up into my night sky washing out the stars.

The cottage night sky, and on this night in particular, provided excellent contrast and detail for faint deepsky objects such as M33.  An astrophotographers dream in terms of photographic conditions in my neck of the woods!

This image is a total of 200 minutes of colour data obtained as 10-minute subs. I used the Orion 10-inch astrograph reflector along with my reliable workhorse the Canon DSLR modified 350D 8MP camera. A Skywatcher EQ6 mount was used for tracking, along with an Orion starshoot autoguider, PHD (guiding) and Nebulosity 3 for acquisition. (This is short exposure image taken with a C925 and ASI1600mc of M33 in 2016 for some testing I was doing.)

The majority of processing was done in PixInsight with some added noise reduction applied within Photoshop using masks. I had to go a little heavy on the noise reduction because I did not take dark frames along with this data. Why no darks? It was late and I had just swung the scope over to M33 from the Cocoon Nebula. I was much more interested in getting it going again and leave it to image for the remainder of the night — I’d finally be getting some sleep while my photon collector worked tirelessly through the night which is opposite to most nights spent imaging.

Those of you not familiar with astro-imaging using a DSLR, you will need to take what are called “darks”. These are a series of exposures the same length as your sub frames (also called lights) but either the scope is covered or the camera is so that no light at all reaches the sensor. What this does is creates a record of the noise being generated within your images. You can then stack these dark frames making a master-dark frame and subtract the noise from your sub/light frames. This makes the image look much cleaner and smoother.

The darks should be done around the same temperature as the sub/light frames are acquired. Noise levels in DSLRs can vary with temperature change. I usually take 4-6 darks in the middle of my imaging run, after the camera has been working and warmed up – the night temperature stabilized. I also take another 4-6 darks at the end of my imaging session. I then combine all of these into a master-dark frame.

Some people take darks before the start of their imaging session but this I have concluded isn’t a good approach because your DSLR will heat up after a short while and the temperature usually changes getting into the overnight hours which would make those dark frames wrong essentially – you can even be injected noise into your images instead of removing it by doing dark frames the wrong way!

I’ve seen M33 in binoculars in occasion. When you know where to look it’s not that difficult to find it. It doesn’t look like much — a small and faint fuzzy patch in the night sky. Much smaller than the Andromeda galaxy looks in binoculars.

“The Triangulum Galaxy M33 was probably discovered by the Italian astronomer Giovanni Battista Hodierna before 1654. The galaxy was independently discovered by Charles Messier on the night of August 25–26, 1764. It was published in his Catalog of Nebulae and Star Clusters (1771) as object number 33; hence the name M33. It seems to be linked to its larger neighbour the Andromeda Galaxy M31. Suggested future scenarios for M33 include being torn apart and absorbed by Andromeda, fueling the latter with hydrogen to form new stars; eventually exhausting all of its gas, and thus the ability to form new stars; or participating in the collision between the Milky Way and M31, most likely ending up orbiting the merger product of the latter two galaxies and fusing with it much later. Two other possibilities are a collision with the Milky Way before Andromeda arrives or an ejection out of the Local Group.”*

In the upper-left of my M33 photo you can see the red blotch which is NGC 604 – an H II region inside the Triangulum Galaxy. “It was discovered by William Herschel on September 11, 1784. It is one of the largest H II regions in the Local Group of galaxies; at the galaxy’s estimated distance of 2.7 million light-years its longest diameter is roughly 1500 light years (460 parsecs), over 40 times the size of the visible portion of the Orion Nebula. It is over 6300 times more luminous than the Orion Nebula, and if it were at the same distance it would outshine Venus.”*

Whatever the fate of M33 it is definitely a top-pick for astrophotographers – a challenge of sorts trying to capture the dim details of it’s relatively low surface brightness while not blowing out the central core details.

Thanks for reading and #ClearSkies