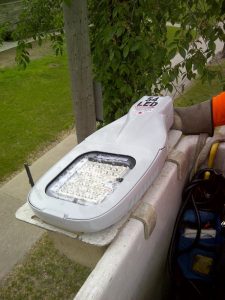 The Region of Waterloo is drafting proposal for a switch to LED street lighting late 2016 and into 2017. They were initially considering using higher colour temperature (CCT) white light in the range of 4000K. This type of white light encroaches on daylight lighting. It also has a large amount of blue light in it which is being shown in scientific and medical research studies to have negative impacts on humans, wildlife, plants and even air quality.

Bright white LED lighting that is rich in blue also increases skyglow over cities by way of Rayleigh and Mei effects. Short wavelength blue light scatters more intensely in the atmosphere than longer wavelengths such as yellow, amber or red.

Introducing bright white LED street lights throughout the entire Region of Waterloo would lead to increases in light pollution across the board. With this concern in mind, The Waterloo Region Nature organization submitted a letter to the Regional Chair Ken Seiling and Region councilors regarding the impacts this broad spectrum lighting would have on nocturnal and diurnal species.

Mr. Shayne Sangster, Conservation Director at Waterloo Region Nature provided a copy of the letter to me and he wrote:

“I am writing to you on behalf of Waterloo Region Nature concerning the refit of street lights to LED to reduce energy usage and greenhouse gas production. We acknowledge that the new technologies are beneficial in terms of carbon emissions and we welcome that.

However, White LED’s commonly used in street lighting currently emit a strong peak of short wavelength light. It is short wavelengths that are mostly responsible for
disorientating and attracting invertebrates, and for human health concerns. Therefore, when the region installs the lights, baffles should be installed to limit light
pollution and glare. The cost will be minimized as there will already be crews working on the lights.

Attached are references of articles in peer-reviewed journals which illustrate the negative effects that anthropenogenic light has on organisms like insects, bats and birds.

We recommend the approval and installation of lamps targeting 3000K light temperature, which would minimize light in the blue wavelength which has been shown to affect diurnal cycles.”

Philosphical Transactions of the Royal Society B. Theme issue ‘The biological impacts of
artificial light at night: from molecules to communities’ compiled and edited by Kevin J.
Gaston, Marcel E. Visser and Franz Hölker. 05 May 2015; volume 370, issue 1667.
http://rstb.royalsocietypublishing.org/content/370/1667