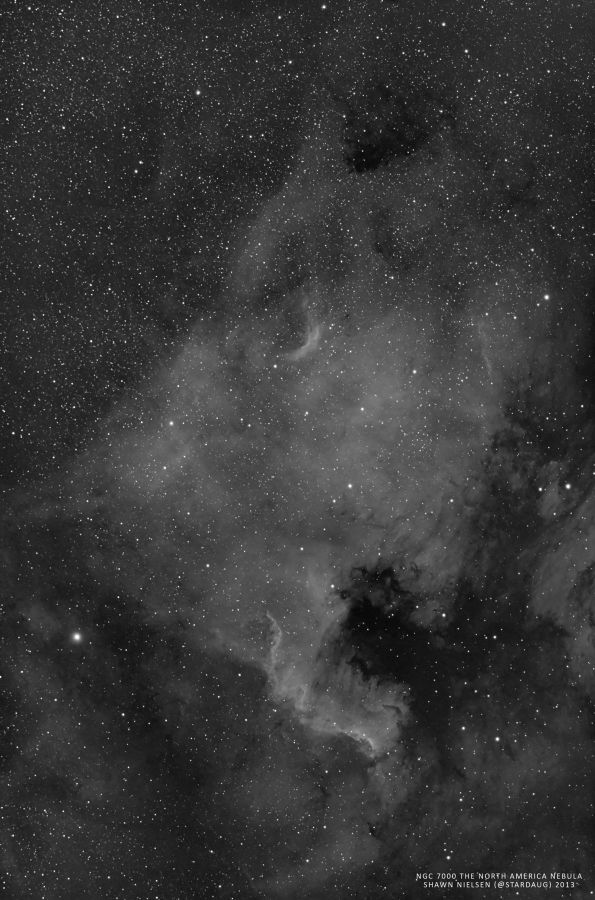 Now that Winter’s snow and sub-zero temperatures are just around the corner for me here in southern Ontario, I’m making less imaging trips to our dark site and instead doing astrophotography from my home. Due to the ever increasing light pollution of the mid-sized city I live in, I am now focusing on narrowband imaging in H-alpha.

I won’t get into great detail here on narrowband imaging but I will say this – it can be done from a light-polluted sky with a lot of success.

Narrowband filters include: H-alpha, OIII Oxygen, Sulpher II, Nitrogen II as examples. Narrowband images taken through a single filter will appear greyscale (black and white) as is the case with my NGC 7000 image here. These greyscale images can be assigned to specific colour channels as well within an RGB workflow which can be used to enhance specific details (as H-alpha does in the red channel) or create false colour images like the Hubble palette which uses H-alpha, OIII and Sulpher II narrowbands.

You can find NGC 7000 in the constellation of Cygnus the Swan.

The North America Nebula which is cataloged as NGC 7000 and also Caldwell 20 is a large emission nebula in the constellation of Cygnus. It is close to the bright star Deneb which marks the the tail of the swan in Cygnus. Deneb is also one of the three stars marking the summer triangle with Vega and Altair being the other two.

See also my 2014 narrowband image of NGC 7000 and the Cygnus Wall that was featured on Skynews Magazine photo of the day.

The NGC 7000 nebula has a remarkable shape resembling the continent of North America, including a Gulf of Mexico. You may often hear this nebula incorrectly called the “North American Nebula”.

Although the North America Nebula is considered more of a summer deep sky object for most, it is actually more ideally placed in the night sky mid to late fall evenings, when it’s high overhead my location.

An object being overhead in your night sky will give you much better results in your astrophotography (and visually as well) as there is less atmosphere for the light to travel through and there is often less light pollution directly overhead versus lower parts of the sky towards the horizon. You’ll have a better view, with more contrast and detail than if you were imaging when its lower in the sky.

I imaged NGC 7000 the North America Nebula, during the overnight of November 21. It was well positioned and a perfect target for my William Optics Zenithstar 71mm APO refractor at 335mm focal length. NGC 7000 is a large object (it covers an area more than four times the size of the full moon) and you will need a wide field camera/telescope setup to fit all of it in the frame.

The North America Nebula has a very low surface brightness, so normally it cannot be seen with the unaided eye.

Not having to worry about light pollution and sky fog limits using the H-alpha filter, I did 10min exposures collecting 180mins (3 hours) worth of data. This data was calibrated, stacked, aligned and processed using PixInsight and Photoshop.

I find NGC 7000 to be extremely fascinating. Here we have a nebula some 1600 light years distance from the Earth. Between the Earth and the NGC 7000 nebula complex lies a band of interstellar dust that absorbs the light of stars and nebulae behind it, and thereby determines the shape as we see it which just happens to be one of the continents on our planet! Amazing don’t you think?