On January 17th, 2019 Philips Lighting held a webinar covering the ecological and human effects of light pollution. Two keynote speakers presented their research and findings. This is my own summary and thoughts on 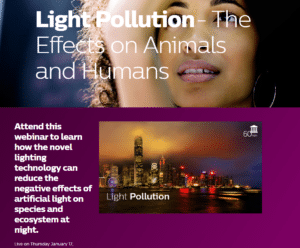 this webinar and the information presented.

The presentation was basic but provided a good overview of the problem and some of the impacts to people and wildlife. There were a number of key takeaways which I feel important for considering when it comes to new projects/developments (more light being added to our environment) and how we use/implement light at night as well as UDM updates.  I hope everyone gleaned something useful from it.