What was herald by the lighting industry and politicians as a means to combat climate change and save our environment has become the enemy within. Energy saving LEDs are increasing light pollution globally and the latest research science has confirmed it.

An interesting article (and links to the research within) written by Andrew Nikiforuk was published on TheTyee.ca. Mr. Nikiforuk as noted in the article, is an award-winning journalist who has been writing about the energy industry for two decades https://thetyee.ca/Opinion/2018/02/26/Energy-Efficiency-Curse/. The latest research is showing that people are using more LED lighting because it’s cheap but that is defeating energy savings and increasing light pollution. A Jevons paradox.

“LED lights also highlight the economic labyrinth of Jevons Paradox. These marvels use 70 to 80 per cent less electricity than the incandescent light bulbs that illuminated my youth.” 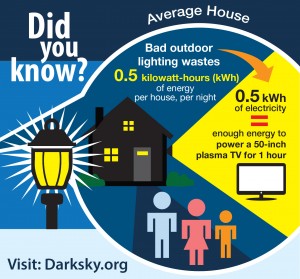 “researchers at Rutgers University recently concluded that the transition from incandescent to LED lights won’t result in any lasting savings: “there is a massive potential for growth in the consumption of light if new lighting technologies are developed with higher luminous efficacies and lower cost of light.” In other words LED have unleashed “new and unforeseen ways of consuming light.”

I actually had brought up Jevons paradox in 2016 discussing LED lighting and light pollution in correspondence with officials and councilors in my area. How cheaper, more efficient technology often has society using more of it. We are seeing it happen all around us as urban environments are reimagined with LEDs, brighter and often more of them.

The often misunderstood and confused pursuit for LED energy efficiency is continuing to brighten our night time.  This poses long term light pollution and negative environmental impacts to ecosystems. Including those that humans depend on.  That isn’t good at all.

The increasing levels of light pollution globably was recently documented in new research data from the VIIRS satellite data which showed light pollution increasing by 2.2% each year. VIRRS is part of a National Oceanic and Atmospheric Administration (NOAA) satellite. VIRRS is not all that sensitive to blue light either, which means it doesn’t “see” it all that well – the problem is most likely worse than 2.2%, taking into account white LED lighting 3000-5000K or higher.

We should be aiming for less than 2700K when switching to LED and low wattage/lumens. It’s also important not to add more lights than necessary or light things up that previously were not just because LEDs are cheap.

We need to start having meaningful conversations about this problem that lead to tangible results in controlling and reducing the spread of light pollution within our environment.  I believe protecting our night environment is as important as protecting our day time environment.